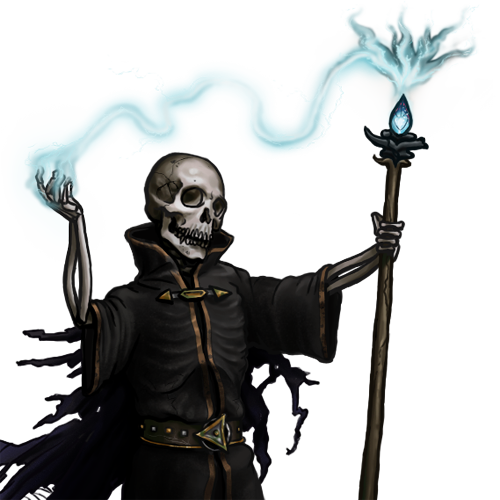 A lich is a powerful undead creature and a frequent opponent of dungeon-delving adventurers. In addition to the standard lich, the lich template can be applied to any creature. This means that liches can exist with a variety of different offensive and defensive attributes.

Liches possess the standard undead traits, in addition to a number of additional traits.

Liches are terrifying. Any creature that looks at a lich within 60 feet must make a Will save. If the save is failed, creatures with fewer than 5 hit die become frightened and those with 5 or more hit die become shaken. The effect lasts for a number of rounds equal to the lich’s Hit Dice.

Any living creature that actually touches a lich must make a Fortitude save or be paralyzed — permanently. This paralysis cannot be dispelled, but it can be removed with Remove Paralysis or Remove Curse.

Fighters should be aware that standard liches have DR 15/bludgeoning and magic. This means that you should either use a bludgeoning weapon or a magic weapon against liches. Bludgeoning weapons include clubs, maces, morningstars, staffs, and warhammers.

Spellcasters have quite a few things to remember about liches:

It’s not all bad news though:

Polymorph Any Object – Turn the lich into a teddy bear and then beat the stuffing out of it. Targets the Fort save. Downside: 8th level spell.

Sunburst – 1d6 points of damage per caster level (maximum 25d6), or half damage on a successful Reflex save. Downside: 8th level spell.

Control Undead – Control up to 2 HD per caster level of undead creatures for 1 minute per level. Downside: 7th level spell.

Sunbeam – 1d6 points of damage per caster level (maximum 20d6), or half damage on a successful Reflex save. Downside: 7th level spell.

Heal – 10 points of positive energy damage per caster level (to a maximum of 150 points at 15th level). Downsides: You have to touch the lich, which may get you paralyzed. Targets the Will save.

Undeath to Death – Destroys 1d4 HD worth of undead creatures per caster level (maximum 20d4) within a 40′ radius burst. Downside: Targets the Will save.

Disintegrate – Target struck by the ray takes 2d6 points of damage per caster level (to a maximum of 40d6). Targets the Fortitude save.

Disrupting Weapon – Makes a melee weapon deadly to undead for 1 round per level. Any undead creature with HD equal to or less than your caster level must succeed on a Will save or be destroyed utterly if hit with this weapon. Downsides: Will save and you have to be higher level than the lich has HD.

Once you destroy the lich, the fun really begins. What you just destroyed was the body of the lich. The liches soul still exists in a container called a phylactery. The soul bound in the phylactery will immediately begin to build a new body for the lich. This process takes 1d10 days. At the end of the process, the lich wakes up fully healed, but without prepared spells and without the equipment you “liberated” from its previous body.

The most common phylactery is a sealed metal box containing strips of parchment on which magical phrases have been transcribed. The box is Tiny and has 40 hit points, hardness 20, and a break DC of 40. However, other forms of phylacteries can be used, such as rings, amulets, or similar items.

The phylactery may be far away from where you destroyed the lich. It may not even be on the same plane. Until you find and destroy the liches phylactery, it will continue to rejuvenate every 1d10 days.

You may be able to use a Knowledge skill check to find the phylactery. This is more reasonable if one of your character is a bard with the Lore Master feature.

Divinationmay give you useful hints as to where to look for the phylactery.

Legend Lore is most likely to aid you in finding the phylactery, but the casting time may mean that the lich has rejuventated (and possibly moved the phylactery) by the time you are done casting the spell. Vision provides the same information, but with a shorter casting time.

Contact Other Plane can be useful, if a being on another plane might have knowledge of where the phylactery is hidden.

Scrying or Greater Scrying might be useful in locating the liches body while it is being built. Discern Location can be used for the same purpose. If you are close to the correct location, Locate Creature might also be useful.

If The Phylactery Cannot Be Found

Liches didn’t get to be liches by being dumb. The lich may have hidden his phylactery in a location shielded from scrying and divination. The lich may also have made his phylactery an object that you don’t want to destroy, such as the crown jewel of the empress or a +5 vorpal longsword.

Don’t despair. You can use a spell like Temporal Stasis or Imprisonment to permanently imprison the lich. If you don’t have access to a suitable spell, you can also bind and gag the lich so he can’t cast spells and bury him in a very deep hole. Stone Shape is good for making form-fitting coffins.

Merwick wasn’t a young mage and had…