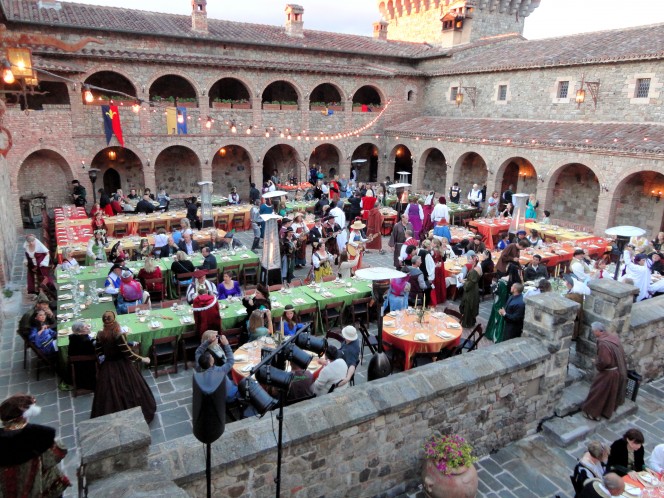 At some point, your characters may decide that they have had enough of hunting down monsters, killing them, and taking their stuff — at least for awhile. Back in 2nd Edition AD&D, this step in character development was somewhat formalized:

When a fighter attains 9th level (becomes a “Lord”), he can automatically attract men-at-arms. These soldiers, having heard of the fighter, come for the chance to gain fame, adventure, and cash. They are loyal as long as they are well-treated, successful, and paid well. Abusive treatment or a disastrous campaign can lead to grumbling, desertion, and possibly mutiny. To attract the men, the fighter must have a castle or stronghold and sizeable manor lands around it. As he claims and rules this land, soldiers journey to his domain, thereby increasing his power. Furthermore, the fighter can tax and develop these lands, gaining a steady income from them. Your DM has information about gaining and running a barony.

There is really no need to set this at a specific level or to limit it to certain character classes. At some point, characters often feel that they would like to have a place of their own to call home. The characters being wealthy and powerful from years of adventuring often leads them into taking leadership roles in the community.

A few magic items already exist which can aid in community building. A Decanter of Endless Water can provide clean water for hundreds of residents. A Cauldron of Plenty can help to feed the populace. A Lyre of Building can be used to construct homes, business, road, and fortifications. An Everburning Lantern can bring light to the darkness. Even a humble Robe of Infinite Twine can provide useful resources to the community.

Many beneficial effects can be created with the Permanency spell. A Symbol of Healing can be set up in a central location to act as a first-aid station. Teleportation Circles can be built to enable efficient trade with distant lands. Animated Objects can provide manual labor. Wall of Fire can be used for heating. Mechanical power can be generated with Gust of Wind (windmills), Wall of Fire (steam engines), or Animated Objects (manual labor).

All items are priced with the standard (albeit broken) formulas:

These costs should probably not be used. Instead, costs that make sense in your campaign should be assigned.

Altar of Amanuensis
The Altar of Amanuensis copies writing from one source (such as a book) to be copied into a book, paper, or parchment. This altar copies 250 words per minute and creates a perfect duplicate of the original. The altar only copies nonmagical text, not illustrations or magical writings (such as spell scrolls or a sepia snake sigil). If the target contains normal and magical writing (such as a letter with explosive runes), only the normal text is copied, leaving blank space in the copied text where the magical writing would be expected. Likewise, if the target contains text and illustration, only the text is copied. Blank paper, parchment, or a book must be provided for the spell to write upon.
Cost: 1,800

Altar of Mending
The Altar of Mending repairs damaged objects, restoring 1d4 hit points to the object. If the object has the broken condition, this condition is removed if the object is restored to at least half its original hit points. All of the pieces of an object must be present for this spell to function.
Cost: 1,800

Altar of Truth
The Altar of Truth causes creatures within the emanation area (or those who enter it) to be unable to speak any deliberate and intentional lies. Each potentially affected creature is allowed a save to avoid the effects when the spell is cast or when the creature first enters the emanation area. Affected creatures are aware of this enchantment. Therefore, they may avoid answering questions to which they would normally respond with a lie, or they may be evasive as long as they remain within the boundaries of the truth.
Cost: 21,600

Altar of Food
The Altar of Food grants each petitioner enough food to sustain three humans for 24 hours. The food that the altar creates is simple fare–highly nourishing, if rather bland. Food so created decays and becomes inedible after 24 hours
Cost: 54,000

Altar of Healing, Limited
Once per day, the Limited Altar of Healing channels positive energy into a creature to wipe away injury and afflictions. It immediately ends any and all of the following adverse conditions affecting the Target: ability damage, blinded, confused, dazed, dazzled, deafened, diseased, exhausted, fatigued, feebleminded, insanity, nauseated, sickened, stunned, and poisoned. It also cures 110 hit points of damage. The Altar of Healing does not remove negative levels, restore permanently drained levels, or restore permanently drained ability score points.
Cost: 47,520

A Word About the WBL

These items tend to be expensive, but they do not directly affect the power level of the characters. As such, if you use the WBL guidelines, a good houserule is that only a small fraction of the value of these items should be counted against the characters WBL limits.

There often isn’t time before a fight to buff yourself and your companions as you would like. Luckily, there…

The release of Starfinder motivated me to…

At some point, your characters may decide…